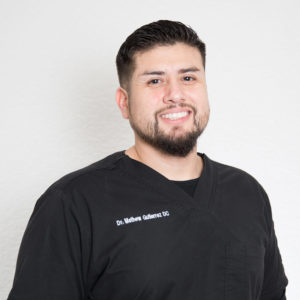 Mathew Gutierrez DC is a Dallas native, who aspires to bring greater health to as many people in the DFW area as possible. He has a background in physical fitness, health and wellness.

Since a very young age, Mathew was very active and interested in how the body functions and how he can help address and alleviate the issues people deal with in their daily lives.

Since becoming a part of Whole Health Partners and eventually taking over the clinic in 2015, Dr. Gutierrez has added a unique approach to biomechanical dysfunction, pain management and corrective care for all patients. Dr. Gutierrez is certified in Fascial Distortion Model (FDM), the OTZ method for frozen shoulder, Graston Technique, Activator Method, has over 100 contact hours in acupuncture/acupressure studies and much more. He has spent hundreds of thousands of dollars outside of his standard doctoral studies to understand and correct biomechanical dysfunction. Part of his training includes hundreds of contact hours working side by side world renowned Dr. Francis Murphy treating thousands of standard care and frozen shoulder patients.

Dr. Gutierrez has had the pleasure of working with many professional athletes and competitive bodybuilders and has been featured numerous times on radio station ESPN Deportes, a local branch of ESPN Radio in Dallas, Texas.

Dr. Francis Murphy grew up in New Jersey and was a competitive wrestler from a very young age. He continued to wrestle throughout his high school and collegiate days. After finishing his collegiate wrestling career, Dr. Murphy moved to Atlanta Georgia where he entered into the family business opening “Murphy’s Deli.” It was during his time as a business man that his path to chiropractic began. One day as he was making his bed, he felt a sharp pain in his ribs. Being a wrestler, he simply assumed this would subside but in fact it did not. Over a period of the next 9 months Dr. Murphy spent $10,000 pursuing the help of countless medical doctors with little to no explanation or benefit. At one point Dr. Murphy was referred to a psychiatrist for mental evaluation, as there seemed to be no explanation for his pain, meaning it must be “all in his head.” Having exhausted what seemed to be all reasonable resources, Dr. Murphy decided this was the way he was intended to live his life with pain upon every breath.

It happens that one fateful day a student from nearby Life Chiropractic College walked through the deli doors. The student noticed that Dr. Murphy looked tired and the deli, which was normally in tip top shape had begun to look a bit run down. The student asked Dr. Murphy what was going on and he shared the story of his rib pain. It was then that this student shared a story about the benefits of chiropractic and how the body worked and why Dr. Murphy had such pain. He then invited Dr. Murphy to come see him at the student clinic where in about 1 hour and for $6.50 he changed Dr. Murphy’s life. Realizing that he had no idea how his own body worked and that he had to take the advice of a doctor simply “because he said so,” Dr. Murphy sold his deli in Atlanta and moved to Dallas, Texas where he attended Parker College of Chiropractic and was a member of the 1995 graduating class.

Dr. Murphy is now the owner and chief diagnostician at Whole Health Partners. In addition to his chiropractic education, he has studied extensively in nutrition as well as meditation and soft tissue techniques. In 2006 Dr. Murphy made a phenomenal discovery which changed the lives of Frozen Shoulder Patients by isolating the cause of Frozen Shoulder Syndrome as a neurological disorder. Since his discovery, Dr. Murphy has been researching and developing a complete curriculum on the resolution of the true cause of FSS, dubbed the OTZ Tension Adjustment. He currently travels around the world teaching other chiropractic doctors the OTZ Tension Adjustment for the treatment of FSS, and has personally resolved over 1000 cases of FSS using the technique.

Dr. Murphy’s FSS discovery and implementation of the OTZ Method was immediately shown to have a dramatic effect on a wide variety of other neurological conditions, which were occurring simultaneously in some frozen shoulder patients. It wasn’t long before the connection between the neurological cause of FSS, known as the Hatcher-Murphy Subluxation, and neurological based developmental difficulties in children was revealed. The OTZ Team of doctors, led by Dr. Murphy, has been researching and testing the results of using the OTZ Tension Adjustment for the treatment of Hatcher-Murphy Subluxation in children for more than 2 years. The team regularly identifies and reverses this malfunction in children with developmental delays such as Autism, Asperger’s, ADD and ADHD. The preliminary results of Dr. Murphy’s findings were recently published in the December 2012 edition of the Journal of Chiropractic Medicine.

Dr. Murphy also is an adjunct faculty member of Parker University, participating in the Community Based Internship (CBI) program. The CBI program was developed to give the top chiropractic students the opportunity to learn in a real world environment, which prepares them for the challenges of being a doctor and businessperson alike.

Dr. Murphy has had the privilege of presenting his information regarding Hatcher-Murphy Subluxation and the OTZ Tension Adjustment to chiropractors from around the world.

Dr. Murphy has since passed the baton to Dr. Mathew Gutierrez to run and operate Whole Health Partners, while Dr. Murphy now teaches the OTZ Method around the world.

The following is a list of his major accomplishments: